“The first clues to a possible Jewish origin of Hitler came from
the manuscript ‘In View of the Gallows,’ written in his Nuernberg
cell by Hans Frank … In that work he revealed:

Hitler’s father was the illigitimate son of a woman with
the last name Schicklgruber from Leonding near Linz, who worked
as a cook in a Graz household… This cook called Schicklgruber,
Adolf Hitler’s grandmother, was employed in a Jewish household
by the name of Frankenberger when she gave birth to her child.
And this Frankenberger paid child support to Fraulein Schicklgruber
on behalf of his approximately nineteen-year-old son for the
period from the child’s birth until his fourteenth year of age.
There also was correspondence for years between these
Frankenbergers and Hitler’s grandmother, the overall tenor
of which … was that Fraulein Schicklgruber’s illegitimate
child had been conceived under circumstances that made the
Frankenbergers responsible to pay child support… Accordingly,
Hitler himself was one-fourth Jewish.

Although this report has since proven incorrect, the results of
Frank’s research, as well as the essentially similar findings of
an investigation by Himmler in August 1942, were reason enough for
Hitler himself to have serious doubts about his purely Aryan
origin.

[…] First of all, these investigations decisively contradicted
the allegation that Hitler’s grandfather was Jewish. Since Alois
Schiclgruber was born on June 7, 1837, a Jew named Frankenberger
would have had to have been employed in Graz in that same year.
Both preconditions, however, are untrue. Neither in the registry
books of the Jewish synagogue nor in the “birth records” of other
religious communities of Graz is a Frankenberger to be found. An
Alois Schicklgruber appears for the first time in 1900; but since
he was much younger than Alois Schicklgruber, he naturally is out
of the question as Alois’ father. The case is similar with Maria
Anna Schicklgruber, who is recorded neither in the Graz “domestic
register” nor in the “municipal register” for the time in
question, which was impossible anyway, since she was living in
Walfviertel in Lower Austria as a subject of the “Counts of
Ottenstein.”

The most recent genealogical studies have cast additional light on
the identity of Hitler’s grandfather. These studies show that the
illegitimate child Alois, whose family name Schicklgruber was not
officially changed to Hitler until 1876, was never acknowledged as
his own child by his alleged father Georg Hiedler — a variant
spelling was Huettler — even when Georg married Maria Anna
Schicklgruber in 1842. This rejection of paternity was
understandable since Hitler’s real grandfather happened to be not
Georg but his brother Johann Nepomuk Huetter. Nepomuk, a wealthy
married man, had apparently, by means of adequate subventions,
convinced his brother Georg to marry the mother of his
illegitimate child Alois, because this made it possible for him to
bring up the little Alois as a child in his household without
arousing the suspicion of his unsuspecting wife. This also readily
explains why Alois spent his childhood and early youth not in his
mother’s house, but in that of his “uncle” Nepomuk Huettler. It
also explains how after Nepomuk’s death in 1888 Alois Hitler’s
financial situation took such a sudden turn for the better. For,
as Maser at least tried to make plausible, after the
legitimization of the name Hitler in 1876, Alois, as sole heir,
apparently inherited his “uncle” Johann Nepomuk’s entire fortune. 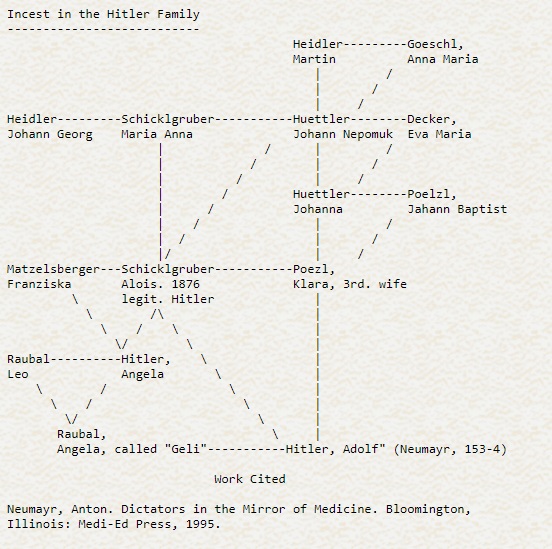