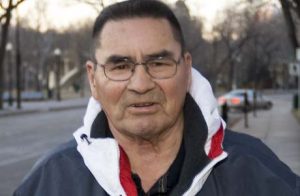 Regina — Former aboriginal leader David Ahenakey, who made national
headlines when he called Jews a “disease” who deserved to be “fried”
by the Nazis, was charged Wednesday with promoting hatred.

Ahenakew is an Order of Canada member and former head of the Federation
of Saskatchewan Indian Nations … and the Assembly of First Nations.
He faces one Criminal Code charge of publicly promoting hatred against
an identifiable group.

[He said the Holocaust was justified]

“How do you get rid of a disease like that, that’s going to take over,
that’s going to dominate?” he said. “The Jews damn near owned Germany
prior to the war. That’s how Hitler came in.

“He was going to make damned sure that the Jews didn’t take over
Germany or Europe.

“That’s why he fried six million of those guys, you know. Jews would
have owned the God damned world. And look what they’re doing.